Missionaries learning how to share Word of God around the world 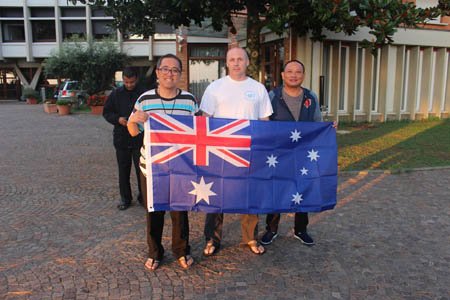 Three missionaries from the SVD AUS Province are taking part in a revamped Dei Verbum Biblical Pastoral Course in Italy, along with participants from all around the world.

The two-month course, which runs through to early November, is designed as an ongoing Biblical formation program for those engaged in the Biblical Apostolate.

Also among the 24 participants are SVD missionaries from all over the globe including from places like South Sudan, Spain, Japan, India, East Timor and others. There are also some lay participants, including a businessman from Indonesia, and a journalist from a Catholic newspaper and a diocesan priest, both from Pakistan, along with two religious sisters from Ireland and Pakistan.

The first Dei Verbum Biblical-Pastoral Course was launched on August 9, 1987, and since then there have been 27 batches of participants undertaking the course for a total of 616 alumni. Among them are 147 SVDs, 131 diocesan priests, 237 other religious priests, brothers and sisters and 101 lay people.

The original proposal was for the program to be held along the shores of Lake Gennesaret in the Holy Land, but for practical reasons, it was changed to Italian Lake Nemi where the SVD’s Ad Gentes Centre is located. 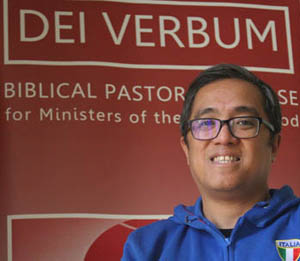 This year’s course is being facilitated by Fr Marek Vanus, SVD, the General Biblical Apostolate Coordinator of the SVD. He is joined by various resource persons from all over the world who facilitate different modules. The facilitators include Bible exegetes like Fr Jean Luis Ska SJ, Fr Craig Morrison OCarm, Fr Wojciech Szypula SVD, Fr Naveen Rebelo SVD and Fr Benoit Standaert OSB. Some of the facilitators are confreres working in pastoral areas like Fr Mathew Thekkeyil SVD and Arlo Yap,SVD, and Lucia Hidveghyova, who is an art historian and Biblical scholar, facilitating a course on Biblical Art.

Fr Elmer says the course has 14 modules, including Attentive Reading of the Scriptures, Lectio Divina, Bibliodrama, Narrative Study of the Bible, Praying the Psalms, Liturgical Bible Study and many more. The participants are also required to submit a project paper.

The course has also included a five-day preached retreat on the writing of St Paul and incorporated outings in the different churches in Rome, a Mass at the Roman Catacombs and a General Audience with Pope Francis.

“We also have some Sundays as free days where some of the participants opted to stay at the centre while others chose to walk around the streets of Rome,” says Fr Elmer. 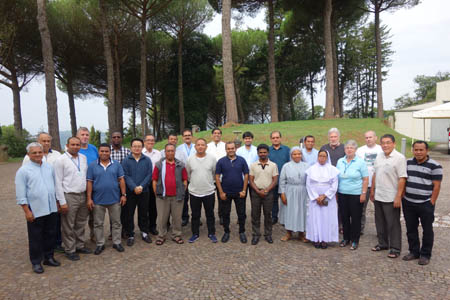 “So far, the course has provided participants with various tools in studying and sharing the Bible in their particular pastoral situations.

“The course also opened up various opportunities for looking at how the Bible could be explored so that it will enrich not only the participants but all the people that they service in their different parishes and pastoral areas.

“The course also provided an opportunity for us to present our situations, sharing about where we are working in terms of pastoral conditions and our work with the Bible Apostolate.”

Still to come in the course are modules on communicating God’s word and the use of social and mass media in the Biblical Apostolate.

“Also, we’re expecting to learn from each other through the presentation of our project papers before we close the course on November 4,” Fr Elmer says.

“This is the first year of the Dei Verbum course after a pause of the program for four years to review and update the course.

“I’m very honoured to be part of this revised program and hopefully, this restart of the program will provide us as ministers of the Word of God with the tools needed to effectively propagate the Word of God in whatever situation we are in.”

MIDDLE LEFT: Fr Elmer is the Bible Apostolate Coordinator for the AUS Province.

BOTTOM RIGHT: The group of international participants in the Dei Verbum course.